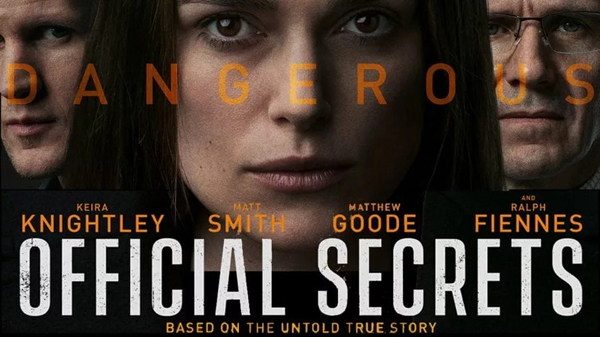 Official Secrets (2019) Cert: 15, 112 mins. Director: Gavin HoodThe truth is always the first casualty of war. (Based upon an untold

The truth is always the first casualty of war.
(Based upon an untold true story.)

Official Secrets tells the gripping story of Katharine Gun (Keira Knightley), a British intelligence specialist whose job involved routine handling of classified information. One day in 2003, in the lead up to the Iraq War, she receives information that the US is planning to spy on the UN to bolster its case for war.  Unable to stand by and watch the world be rushed into an illegal war, Gun makes the gut-wrenching decision to defy her government and leak the memo to the press.   Matt Smith plays Martin Bright, the journalist who broke the story.

Click on this image to see a 5 minute interview with
Katherine Gun & Martin Bright conducted in 2019. (You’ll need to turn up the volume!)

Why not collect a takeaway Pizza from the pub to bring with you?
Check out the Cinema Pizza Menu.
…and remember you can always bring a bottle, or pick up a drink from the pub.