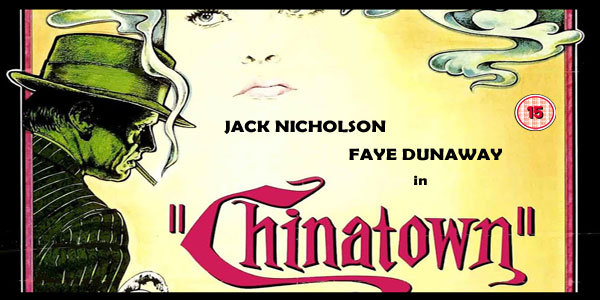 Kicking off our “Classic Mini-Season” is…

A private detective hired to expose an adulterer finds himself caught up in a web of deceit, corruption, and murder.

When Los Angeles private eye J.J. “Jake” Gittes (Jack Nicholson) is hired by Evelyn Mulwray to investigate her husband’s activities, he believes it’s a routine infidelity case.  Jake’s investigation soon becomes anything but routine when he meets the real Mrs. Mulwray (Faye Dunaway) and realizes he was hired by an imposter.  Mr. Mulwray’s sudden death sets Gittes on a tangled trail of corruption, deceit and sinister family secrets as Evelyn’s father (John Huston) becomes a suspect in the case.

Chinatown’  was nominated for 11 Oscars.

One of the greatest Hollywood movies ever made.