Speaker:  Prof. Peter Roebuck SynopsisEngland had fewer cattle products than it could use with a growing population and 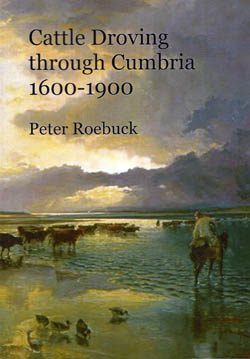 England had fewer cattle products than it could use with a growing population and nascent industries and Scotland needed to export in order to pay for necessary imports. Most of the traffic passed down the west side through Cumbria. The trade grew throughout the 17th and 18th centuries and was not confined to the period after the Act of Union in 1707.  Expansion climaxed during the war years 1793-1815, after which for various reasons a slow decline set in. The trade powerfully stimulated agriculture but also the industrial and service sectors of the economy. However, because droving cattle was such a commonplace activity, few records survive and its significance in interpretations of the agricultural revolution has been hugely underestimated.

The bulk of Peter’s publications as a professional historian have been in agrarian history. On coming to Cumbria in 2007, he was introduced to ‘000s of records relating to the house he had bought, which was a droving stance: its owners earned their main income from droving for over 100 years.

For background reading, you can access directly these two articles by Peter, published in the Transactions of the Cumberland and Westmorland Archaeological and Antiquarian Society:

The Parkers of Old Town and District in Cumberland: Yeoman Farmers, Industrialists and Landed Proprietors, 1630-1900.

Cattle-droving through Cumbria after the Union: the Stances on the Musgrave Estate, 1707-12.