The Christmas Fair, a tradition of many years’ standing, was held in St Peter’s Church ito raise funds for general expenses. Not only was there a variety of stalls, games, and delicious soup-and-roll meal-deal lunches to enjoy but also, what has become another annual tradition, window displays on a Christmas theme created by members of village organisations and local families. Those visiting the fair were invited to vote for the display they liked best.

The theme for 2017 was Christmas trees: eight imaginative displays were created, together with art work done by the children of Asby Endowed School, who had also made items for their window. Competition was very keen – the winning window design, won by just one point, was made by members of Asby Book Club; second place Asby Endowed School. These displays will stay in place until Epiphany/Twelfth Night. 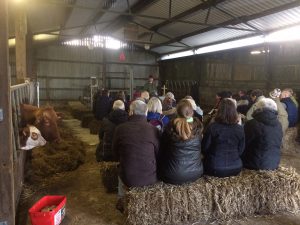 The Advent-in-the-Barn service next day was an innovation for the church. Almost forty folk gathered in the barn at High Plains, Drybeck for a short Advent Sunday service on the theme of the ‘Light of the World’. This was led by the Rev Kristy Pattimore. Owners, Louise and Steve Reeve, had arranged for animals including cows, sheep and ponies to be in stalls nearby which meant the proceedings were accompanied periodically by gentle animal noises. Others taking leading parts in the service were Janice and Bethany Brown who read the lesson and Andrew and Adam Brown who acted out a short sketch.

Following the service mulled wine and refreshments were served while the visitors enjoyed the animals, the distant views, and what turned out to be a beautiful sunset.

Please feel free to contact the Group Officers, as follows:

If you would like to support the work of the Tree Group by making a donation to help cover the costs of essential tree guards or the purchase of trees for planting, that would be very much appreciated.

We will be working with local landowners to identify small areas of land that can be used to plant trees or hedges. Occasional requests will go out to members, seeking volunteers to survey areas of land to assess the age and health of trees and to identify possible planting areas, as well as to take part in planting trees and hedges. These activities will normally be scheduled to last for no more than three hours.

The Tree Group has insurance to cover members carrying out these activities.

A membership form can be downloaded here,
or obtained from the Secretary:
Keith Cooper


There is currently no membership fee.

Unfortunately Covid-19 has not gone away, and we still want everyone to feel safe whilst being able to enjoy the film.