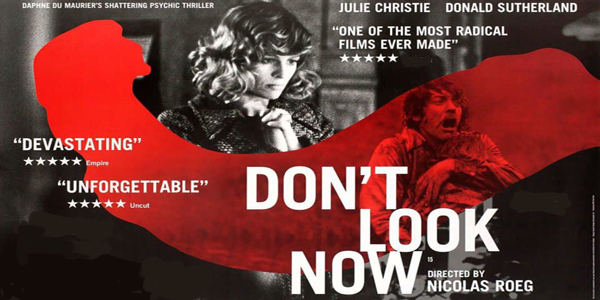 Following our Halloween Supper, our second film of the evening:

This summer saw the restored release of a film which set the standard for psychological horror movies.
Based on a story by Daphne du Maurier, the film centers on Laura and John Baxter (Donald Sutherland and Julie Christie), who have recently relocated to Venice so that John can oversee the architectural restoration of an old church.  Both hope that the change of environment will allow them to forget the recent tragic demise of their child, but they instead find themselves surrounded by reminders of death, as the city attempts to deal with a series of unexplained murders.  The eeriness intensifies when they encounter a blind psychic and her eccentric sister, who promise to contact her daughter’s spirit.  Laura embraces the idea, but John remains sceptical until he experiences his own visions: fleeting glimpses of someone in a red coat similar to one that belonged to his daughter.

You can now reserve a table online.  Just go to the cinema web page an click on “Make a Reservation”.